THE SECOND INFORMATION MEETING DURING 2019 WITH ENTERPRISES IN MINING SECTOR 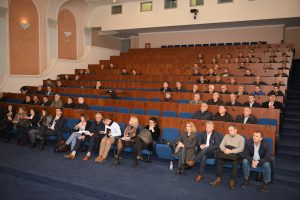 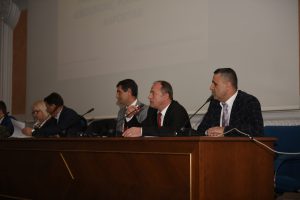 ICMM after the second information meeting held on 21 February 2019 organized the second meeting with enterprises oriented in mining sector.

In the introductory remark, the Director of the ICMM, Mr Ramiz Krasniqi, after informing the participants for the purpose of this meeting by thanking them for participation, briefly informed as well for amendment and supplementation of Administrative Instruction which are more advanced comparing with the periods in the past.

The Chairman of the ICMM Board, Mr Musa Shabani, informed the participants on the present state of mining sector, the ICMM’s activities and the amendments done especially in the secondary legislation, with the only purpose to increase the quality of management and services. Among other things, Mr Shabani expressed that the ICMM is committed to implement the Government Policies related to mining sector. ICMM actually manages 670 mining entities. In total 250 licenses and permits have been issued only during January- November 2019 period. While speaking about the illegal operations, he expressed gratitude for cooperation in the joint action with the Kosovo Police Service, the Environment Inspectorate, the Forestry Inspectorate and the Municipal Inspectorates which resulted in putting tapes to 194 illegal operators. This action has directly affected the decrease of informality in mining operation and it will continue until this phenomenon disappears. Regarding the revenues managed by the ICMM, 97% of those planned are realized until today. The meeting will impact in the cooperation of the institutions with the enterprises of the mining sector, and will encourage them in the expansion of investments, said among other things in the speech of Mr Shabani.

The purpose of the meeting was to inform the enterprises for:

– Rights and obligations for Mining License or Special Operation Permit with emphasis on planning for the following year, quarterly reporting and annual reporting

– Entry into force of the Administrative Instruction with No. 01/2016 “Classification and valuation of mineral resources and reserves and record-keeping”

– Notification on amending and supplementing of some Administrative Instructions.

Representatives of enterprises during the questions, among other things expressed concern about licensing of physical and legal persons for drafting the geological and mining projects. “Notarized contracts shall be regulated by IA and it shall be solved the problem of payment for engineers since 270 working days are foreseen by law while the specified payment (170.00 €) does not justify it”, expressed among other things Prof. Dr. Mr Rafet Zeqiri.

The Director of the ICMM, Mr Krasniqi informed the representatives of enterprises that there will be analysed all contracts for supply with resources submitted to ICMM by enterprises with mining licenses and enterprises that have applied and provided with special operation permits concrete base and separations. According to some data from field and based on reporting of enterprises, these contracts with cases have possibility to be unlawful.

The ICMM Director concluded in the end that these meetings due to their importance will be held as well in the future.