Kosovo has a varied geology that ranges in age from the Neo-Proterozoic to the Holocene. The geology is characterised by substantial structural features on a regional scale, including normal faulting and thrusting.

A general simplification of the stratigraphic sequence is as follows. 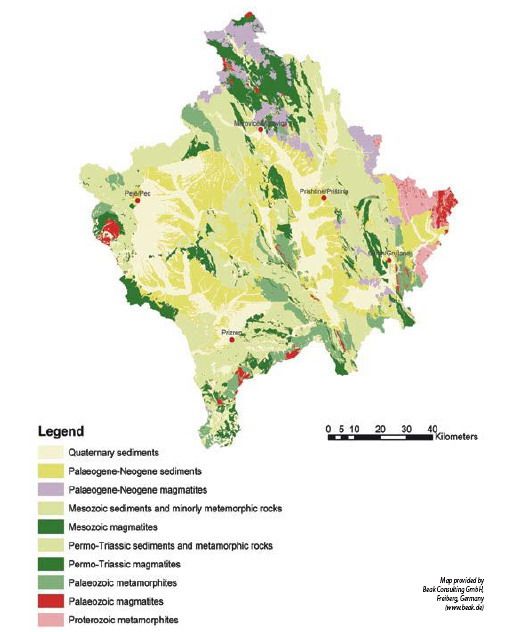 The oldest rocks form the Neo-Proterozoic basement, which is composed of crystalline schists and granites, representing the products of regional high-grade metamorphism. These rocks mostly occur in the north-eastern part of Kosovo.

Over the continental basement was an extensive sequence of shallow water marine sediments (clastic and chemical) of Late Permian to Early Triassic age that were invaded by acid magmas as the continental crust thinned, resulting in the anatexis of pre-existing rocks. Continued stretching and thinning led to physical separation of the continental crust, resulting in the extrusion of basalt, hosting highly irregularly shaped pods of high-grade chromite. This separation was extensive enough to lead to the formation of the Paratethys Ocean that ran across the Balkans, including Kosovo.

The Paratethys was a branch of the main Tethys Ocean that ran across southern Europe, the Mediterranean and North Africa. A reversal of tectonic plate movement led to the eventual closure of the Mesozoic-age Tethys Ocean, including a segment called the Vardar Ocean (Paratethys) that ran across Kosovo. By late Jurassic times, the presence of a remnant Vardar Ocean as a shallow sea, led to the chemical deposition of thick and extensive carbonate platforms.

By Cretaceous times, the eventual retreat of this sea and the stability provided as a passive continental margin, led to the deposition of clastic sediments that range from marine to terrestrial in origin. Collision between the landmasses that had flanked the Vardar Ocean forced the westward obduction of remnants of oceanic crust upon continental crust. The result is the remnants of oceanic crust found throughout the Balkans, forming linear ophiolitic sequences aligned along the regional NNW-SSE regional structural trend. These obduction events are polyphase and would appear to represent crustal accretion, resulting in the development of several linear belts of ophiolites, ranging in age of obduction from Jurassic to Cretaceous. The rocks that were overthrust during the emplacement of ophiolites are called the ‘sole’; rocks and form units called mélange. Such ophiolitic mélanges are characteristically composed of chert, serpentinite, mafic volcanics and carbonates, all of which may be in the form of fragments within chaotically sorted olistostrome units.

In Late Cretaceous times, extensive continental collision during the Alpine Orogeny led to the formation of the Alps and associated mountain ranges throughout central and southern Europe. The rapid erosion of these contorted rocks of both marine and continental origin resulted in the deposition of the flysch cover sequence, composed of marly limestones and clastics. As the Alpine Orogeny waned, so the young mountain ranges were eroded to produce the continental molasse cover, sequence that formed predominantly in intermountain basins throughout the Alpine Zone. Some of the continental clastic sediments preserved in Kosovo probably represent molasse deposits.

Basin depressions in Kosovo represented extremely favourable places for vegetation growth that finally became overwhelmed by sedimentation and led to the formation of the substantial stratiform lignite deposits. The Pleistocene glaciations that affected Europe removed much of the soil cover from Kosovo’s ring of surrounding mountains, leading to the formation of substantial talus deposits along the steep mountain flanks. 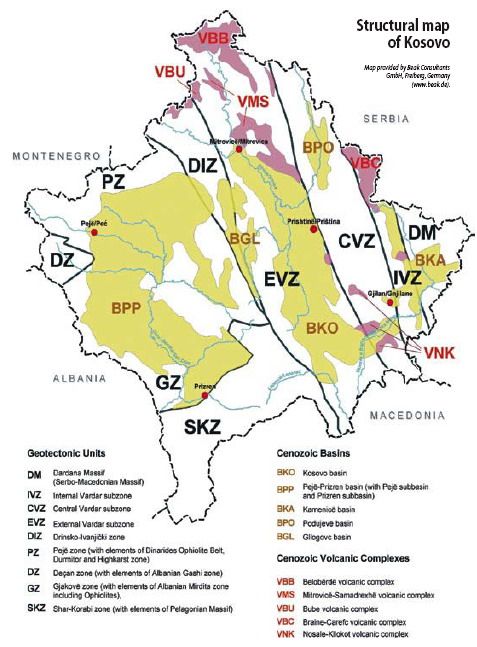 Structurally, Kosovo is geologically divided into two roughly equal-sized halves (the Vardar Zone to the east and the Drenica (Drina – Ivanjica)/Korabi – Pelagonian Zone to the west) by the NNW-SSE trending suture between the Dardania massif (Serbo-Macedonian) in Kosovo and the Dinaric Geological Belt of Albania. The Mesozoic transform fault zone, the so-called Shkoder-Peje lineament, divides the Drina and the Korabi into two separate zones. The Vardar Zone is economically important as it hosts the Trepca lead-zinc-silver deposits. These deposits vary from carbonate-hosted skarns and karst fillings to vein deposits.

The Mesozoic limestone platforms have been fractured by several generations of faults oriented in different directions. The limestones are reactive rocks capable of absorbing minerals-rich heated brines, and the metals came out of solution in these favourable horizons. The Vardar Zone may have originated either in the Early Palaeozoic, as part of the Palaeo-Tethys that separated Gondwanaland to the south from Eurasia in the north, or in the Triassic, similar to the present-day Red Sea oceanic basin.

Final closure of the Vardar Ocean is unclear and may have occurred in either the Cretaceous or Early Tertiary. The formation of the ophiolites via ocean closure and thrusting is important in that the ultrabasic units host chrome, and these serpentinised rocks break down under tropical to sub-tropical weathering over time to produce accumulations of bauxite and lateritic nickel. The bauxite deposits in west central Kosovo are hosted in karst limestone and represent the remnants of these weathered ultrabasics.